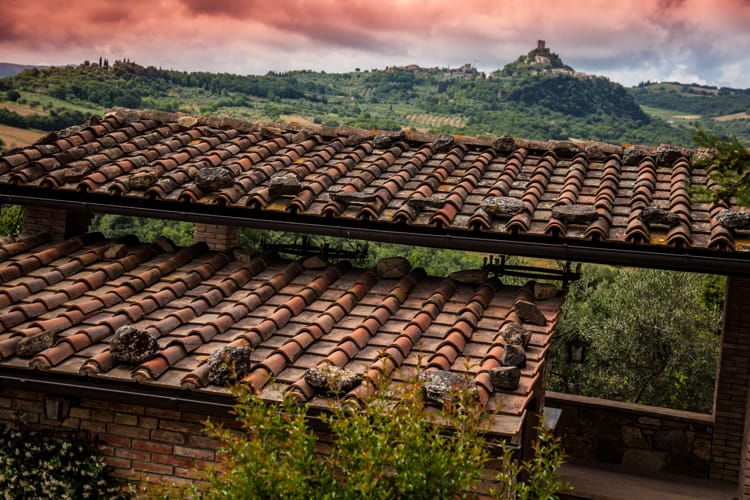 Two weeks ago, we published a post about Castiglione d’Orcia, a small town in Val d’Orcia that has a very interesting history. Today, we want to tell the story of another medieval village, Rocca d’Orcia.

The tiny village of Rocca d’Orcia is crowned by the imposing structure of the Rocca di Tentennano, a fortress that should be visited. Dominating the countryside, this imposing limestone fortification was meant, like so many other structures in the area, so stand guard over the Via Francigena, the pilgrim’s road leading from France to Rome. From its almost impregnable position, the local rulers had a safe spot from which to control the territory.

Most of the Fortress was built between the years of 1250 and 1258, but the spot on which it stands was used as a military outlook and defensive point from the 10th Century onward. At the time of this aforementioned development, the Rocca passed into the hands of the government of Siena. The Senesi fought the Fiorini from here and the Rocca passed from Siena to Florence and back again through a long history of centuries of battle. But the Rocca is also famous for more than its military history.

According to legend, it was here, in 1377, that Saint Catherine of Siena sought refuge, and experienced a miracle; she was miraculously taught to read and write here in Rocca d’Orcia. The Saint’s writings make reference to this, and the Rocca is a draw for religious pilgrims as well as military and historical ones.

The Rocca di Tentennano was abandoned in the early 20th Century when it was no longer of any military importance. The last owners, the Scotto family, donated it to the State of Italy, and it is now restored and open to the public.

The defense systems of the Rocca di Tentennano were closely integrated with the village of Rocca d’Orcia that lies below. The walls of the town contained the entrance courtyard of the fortress, and an ancient door is still visible, though only partially, in the village today. To visit both Rocca d’Orcia and the Rocca di Tentennano, it is best to park in the area that lies at the foot of the steep slope leading up to the Fortress. One can walk along the cypress-lined hill that leads to the main entrance and then can wander down into the little village.

Although structurally much as it was in the days of Sienese military glory, the restoration of the Rocca di Tentennano dates from 1975, and there are several modern staircases, railings, and windows that were added for visitors’ convenience in 1989. The views are even more striking here than from the ruined fortress of Castiglione d’Orcia. Looking down, the rocky and steep little village of Rocca d’Orcia lies directly below the terraces of the Rocca. At the top of the village is the Chiesa di San Simeone which was built in 200 AD. This ancient church once housed art treasures, but alas, they were stolen in the 1980s. A cobblestone walk leads from San Simeone through the main part of the village, the Borgo Maestro, and to the Chiesa di Madonna del Palazzo, which is now a private home. Nearby lies the Piazza della Cisterna, a tiny but rich Folk Art Museum, and the ruins of the Town Hall.

The beautiful valley of the Orcia River, flowing clearly over its rocky bed, also calls to visitors. Herons and kestrels can be seen on the partially paved path that leads from Rocca d’Orcia to the castle of Ripa d’Orcia and on to Bagno Vignoni, which we will discuss in an upcoming newsletter. Lovely woods of ilex welcome the adventurous hiker, and if you are so inclined, walking directions can be had from the local tourist office.